I actually got a lot done, but they’re the sorts of things that, if I did them correctly, you won’t see them. It’s a little frustrating to push out an update that looks nearly identical to the previous one, but that’s part of the reason I do these monthly writeups.

First up, and probably the most visible, is the “mouseover” text you can see on the right (the small dot above the word “Bedroll” is the crosshair, not a glitch). Currently, this only shows up when you point the crosshair at a bedroll, but the system is attached to the UsableItem class, 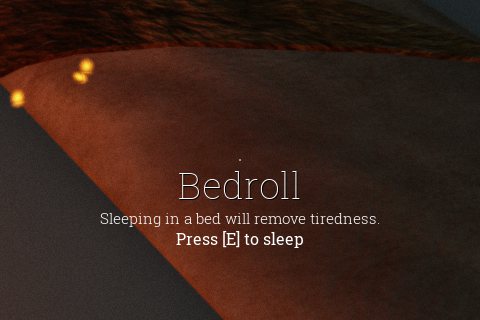 so it will work with any item than can be used. Every time I use UMG, I like it more and more: this entire system took about 30 minutes to set up (once I had gotten all the conceptual work out of the way, of course).

Secondly, only tangentially visible, is the work I’ve done to my design doc. The document itself is not public, so you can’t see it (yes, I’m a little afraid of idea-poaching), but it’s where I outline my plans and note things I’ve done. Two or so weekends ago, I sat down and poured over it, adding and removing a whole lot of things. Most of these were minor changes, but big one was the removal of the Experience system. Rather than awarding experience points to the player per-kill or as a quest reward, the closest thing in the game (plan) to the classical notion of experience is the total length of in-game time that the player has controlled members of a certain lineage or bloodline. The longer you roam the world, the more options will open up to you. Not much of this system is usable yet, but the beginnings are in place, and you’ll get to toy around with it in the coming months.

Finally, the biggest change: the Character/Creature refactor. I realized that I was trying to optimize too much too early, mainly due to the feeling that the differentiation between the Character class and that character’s genetic and bloodline components had been abstracted to the point where it was very difficult to use, and quickly becoming unintelligible (even typing out that sentence took two or three tries). I remember why I had originally made the decision to separate a character from its statistics, but with the removal of the bloodline system and the cutting-back of the CreatureManager’s role, there is no longer any performance gain from the separation, and it had come to only make things far more complicated for me to program. So, as tough as it was to delete something that took me a while to think up and create, I had to do it. In the end, it was for the best.

added a hold/toggle mode for sprint and walk keys. By default, sprint is a hold and walk is a toggle.

added world boundaries; it should no longer be possible to walk off of the edge of the world.

changed the size of some of the HUD elements. They should be less obtrusive now.

removed Creatures entirely; creature functions have now been rolled into the Character.

removed SpawnVolume; it simply wasn’t working and was creating way more trouble than it was worth.

removed Experience to better reflect my vision for the game.

Characters are the incorrect colors (males are pink, females are blue).

You can download 1502 as a self-extracting archive (308mb, 706mb decompressed) directly from icannotfly.net. If you find any bugs, please let me know.

If you need or want debugging symbols (49mb, 391mb decompressed), you can download those, too. Extract this to the same directory as the game itself, and the subfolder structure should line up.