As you can see, the big addition here is some new, World Machine-made terrain. It’s not perfect, and the procedural material needs a lot of fine-tuning (and work in generally, really), but it looks a whole lot better than the old landscape. Everything’s fully explorable, and the terrain system is better at handling collision than UDK’s was, so there’s no danger of falling through the world at strange junctions. Run around, have fun exploring! 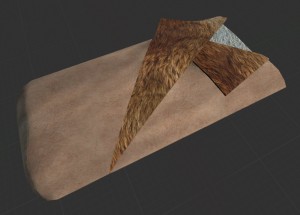 This is supposed to be a bed.

The second major change, not visible in the above screenshot, is the new sleep system. A “tiredness” counter increments by 1 for every in-game minute the player is awake.  Eventually, but not yet, this counter will start to confer downsides and debuffs once it reaches a value approximate equivalent to being awake for a full day. After two days, the player runs the risk of dropping to the ground and falling asleep out of sheer exhaustion, (it feels really weird saying this) similar to The Sims. To avoid this, it is advised that the player sleep every so often by walking up to a bed (an example of which is shown to the right) and pressing [e]. Unfortunately, I just now thought of adding some kind of “press [e] to sleep” message onscreen, so there isn’t one currently, but should be by 1502.

The changelog below isn’t too big, but I have a good excuse (don’t I always?): I was moving into a new flat for the first half of the month. I’ve sorta settled in, but I’m still running around and snatching new (to me) bits of furniture off neighborhood curbs. I am still undecided as to weather or not I want to accurately portray moving in the game, but I am leaning towards “hell no.”

added a whopping new 2km2 terrain and a procedural material to go with it. Rock is painted according to slope and sand/gravel according to altitude.

added a SpawnVolume class so that new pawns can spawn somewhere other than around (0,0,0) and so that, eventually, villages can be marked as spawn “zones”.

added a bedroll model. It’s supposed to be a section of hide that has had some wool stitched into the inside. Admittedly, it doesn’t look very good.

added classes to describe usable items in general and beds specifically. I also learned about the useable/usable debate and realized that I use both interchangeably and without noticing it. This has led to a lot of compile errors.

added code to give the player – or any character, really – the ability to “use” items. Currently only beds can be slept in.

added a debug bar to show which useable item the player is currently looking at, if any.

added tiredness as a way of tracking how long characters have been awake.

added a debug bar to inform the player of their character’s tiredness.

fixed the crash that was preventing 1412 from starting.

When adding the new terrain, I forgot to move the map boundaries, so it’s possible to fall off the edge of the world. You’ll generally get a “this should never happen” message, but you occasionally may fall forever.

CRITICAL: there is a transient bug that may occasionally cause the game to crash immediately on startup. If this occurs, try starting the game again.

You can download 1501 as a self-extracting archive (300mb, 705mb decompressed) directly from icannotfly.net. If you find any bugs, please let me know.

If you need or want debugging symbols (48mb, 392mb decompressed), you can download those, too. Extract this to the same directory as the game itself, and the subfolder structure should line up.