This was a close one. I had set a goal of implementing a respawn system for this release, but I didn’t make it. I’ve managed to kill the player and I have a rudimentary bloodline system in place, but respawning from a blueprint is proving to be a whole lot tricker than I had first imagined. 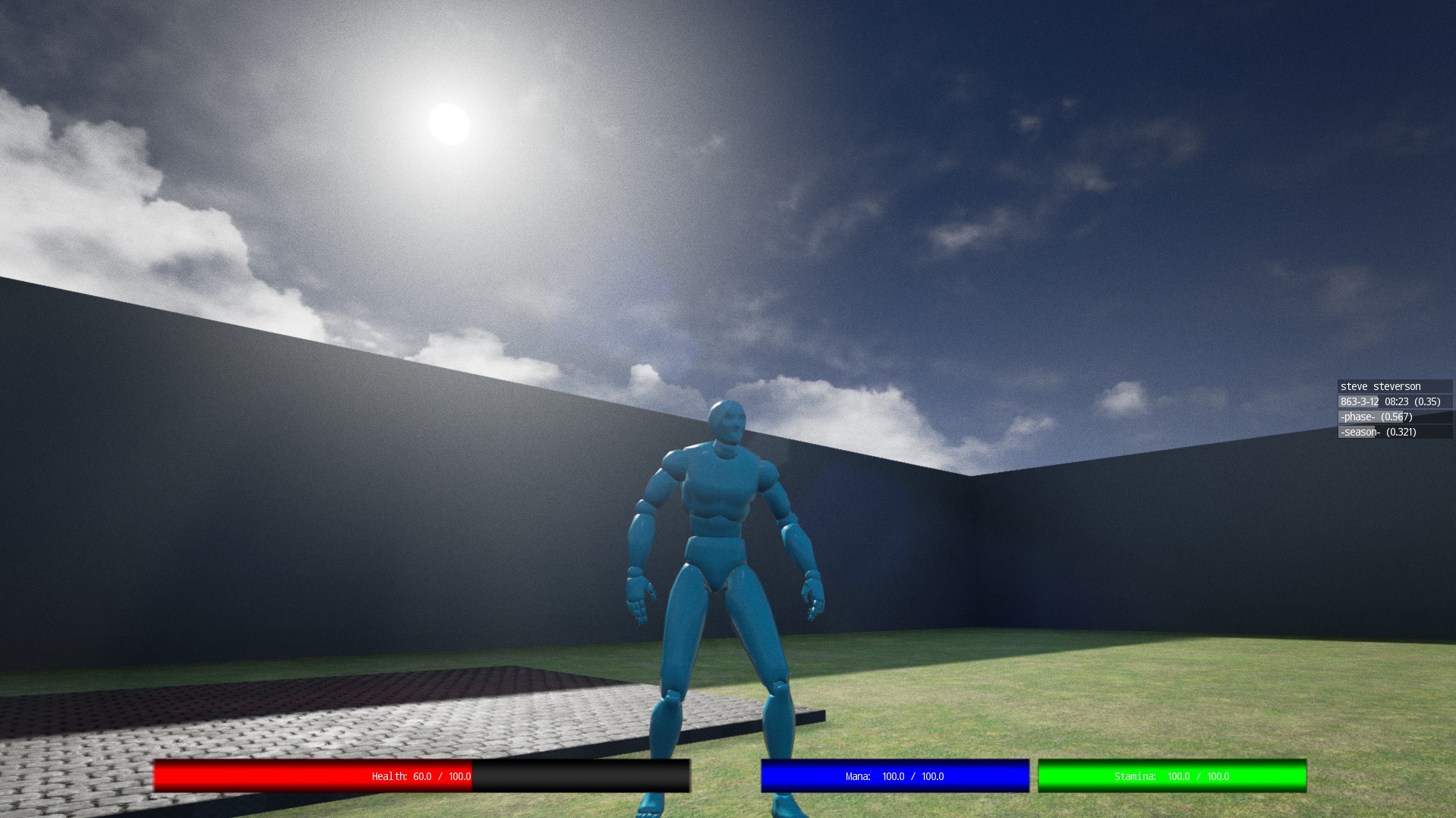 Basking in the warm sunshine.

The HUD, however, is another story: after abandoning Slate, I went back to Canvas and almost instantly made progress. It’s not pretty, but it does get the job done, and it’s a whole hell of a lot easier to use than Slate. The debug bar system on the right, for instance, took me about two hours to set up, from start to finish. Compare that with the 20+ hours that I put into trying to get Slate to work (with no good results), and you can see why I have a grudge against it.

Anywho, hopefully I’ll have respawning working for the next release.

added movement to the sun. The game starts at 0800 and the default rate of time’s passage is 48 real-world minutes per in-game day.

added health, mana, and stamina. Currently only health has any sort of implementation: stepping on the cobblestone platform will gradually deal damage to the player, eventually causing death. Note that since there is no respawn system in place yet, you will need to type RestartLevel into the console to respawn.

added sprinting (hold [LSHIFT]), walking (toggled with [LALT]) and running (default). Walking acts as a toggle: when activated, sprinting will not deactivate walking, meaning that you will return to walking upon releasing LSHIFT. These keybinds are currently hardcoded and cannot be changed. Sorry, lefties.

added traceline spawn on left-click. This doesn’t do too much right now, but will be extremely important later on.

added version number to the top-right corner of the screen.

added ragdoll mode, which can be entered by pressing [G]. This is considered highly experimental and mainly for laughs.

fixed TimeRate console command. You can now set the rate of time’s passage and it will correctly update.

There’s no menu, so to exit, open the console by pressing [`] or [~], (below [ESC]), type exit and hit [enter]. The 32-bit build does not include console functionality, so you’ll have to figure out your own way of exiting; killing the game via Task Manager works pretty well.

You can download 1405 (binaries are included for both x86 and x64) directly from icannotfly.net. If you find any bugs, please let me know.