This is finally starting to feel like a real game.

Items have been in the game for a while (well, item, really; the bedroll), but now you can finally pick them up! To do so, simply look at one and press F. Your character will need to be close enough to the item to reach it with his/her arms in order to pick it up, though: if you can see the onscreen text that describes the item, you’re close enough.

Since arms work both ways, you can also place items in the world now. Once you pick an item up, you’ll see it appear in the inventory list on the right-hand side of the screen, at the bottom of the debug bar list. Next to each item is a number ranging from 0 to 9: press the corresponding number to begin placing that item. To cancel placement mode without placing, press the number of the item you are currently holding. To place the object you’re currently holding, make sure it’s on a surface (can’t place items in midair), and left-click with the mouse. Items do not yet change color to signify weather or not they can be placed in their current location, so you’ll have to use your judgement. Items also do not fall after being placed, even if the item they were placed on top of is removed, so it’s entirely possible to make an apple tower to the moon if you really want to.

Which brings us to the second major change: food and energy. The mainstay of any trendy survival game, eating food increases your character’s energy, which prevents he or she from starving to death. At this point, since starvation isn’t implemented yet, having 0 energy left has no detrimental effects. Since stamina burns energy to regenerate, it’s even possible to make energy go negative.

Two food items are now in the world: an Apple, which restores 110 Calories of energy, and a Leg of Chicken, worth 275 Calories. For the time being, energy content is measured in kilocalories (kcal or Cal), but this may change to joules in the future.

Running and sprinting drain stamina much as they did before (though the exact rate has been tweaked a little), but jumping now also reduces stamina, and by quite a lot. If there’s not enough stamina left to jump, that character will not be able to, no matter how hard you press the spacebar.

In addition to the inventory, two other debug bars have been added; movement speed (0 – 900, measured in cm/sec), and energy burn rate, which doesn’t include energy lost to basal metabolism (heart beating, brain thinking, etc), and shows a value that’s calculated per-frame. It’s not the most useful thing in the world, but it proves that replenishing stamina burns through energy at an increased rate compared to just standing still.

If you tuned in for any of the Twitch streams in the last few days, you probably recall that there was an issue with dead bodies floating several hundred feet above the coastline. Aside from ruining several romantic walks along the beach at sunset, this phenomenon was very confusing to me because I couldn’t figure out at all how these bodies had traveled so far from their root component. I think, though, that what was happening was that characters were, for one reason or another, attempting to enter into ragdoll mode while they were already ragdolled, which caused their current position in the world to be saved as their body’s relative location. On larger maps, this probably would have led to corpses rocketing off into space, and on smaller ones, they probably would have just gotten themselves stuck in a roof somewhere. I’ve since added a check to the ragdoll enter and exit functions which should prevent this from happening. So far, it looks like it has. 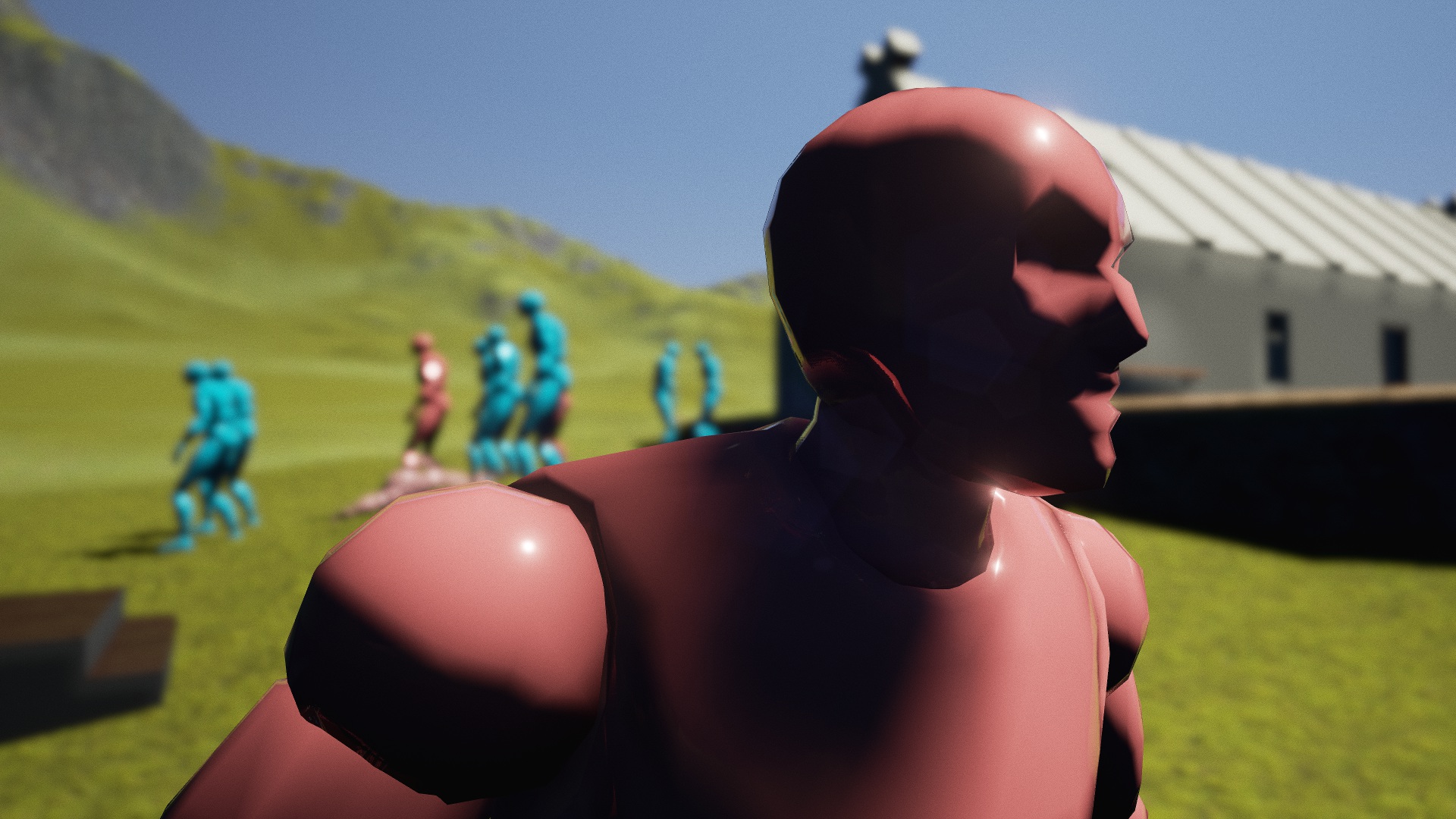 The new Depth of Field effect at its maximum strength

There were a few visual changes, too; the largest of which is dynamic depth-of-field. Objects far beyond the distance from the character’s eyes to whatever is in the center of the player’s screen will become slightly blurred, and this effect is updated per-frame. I’m not a fan of any kind of overdone visual effect in games (think about bloom to understand why), so I’ve deliberately tried to keep this effect subtle; the focus range is wide and the threshold is soft. The effect does get strong when you are close to an object, but you will need to get into kissing range for this to become apparent.

I also added a “suit zoom” function, à la Half-Life 2. Hold Z to narrow your field of view by a significant amount. This is a dubug function and will later be removed from the normal/shipping version of the game, so enjoy it while you can. How many craters can you count on the moon?

There were a bunch of smaller changes made, but most of them were backend.

added ability to pick items up (F) and add them to inventory.

added ability to place items in world and remove them from inventory.

added food as a category of item.

added an apple food and a leg of chicken.

added a zoom function (Z) for looking at things in the distance.

changed stamina so that it now eats up energy when regenerating.

changed MoveUp to accept a distance (will default to 1024 if no/invalid value passed).

changed UsableItem to just Item because all items are usable.

changed screen percentage rendering back down to 100%.

changed time simulation so that gameplay now starts in the morning, both at the start of the game and when changing generations.

changed time simulation to prevent player characters from immediately dying when they spawn into the world.

changed the color of corpses to a much lighter shade of their previous color.

changed groggyness to first 10 minutes of being awake. 16 is a realistic duration, but also realistically annoying.

disabled headbob when not in firstperson mode.

disabled pawns’ ability to ragdoll from sleepyness if time is fast-forwarding.

fixed the ToggleHeadbob command so that it actually toggles again.

fixed stamina so that it no longer goes over 100 when being regened by energy.

fixed max placement distance; it is now the same as max pickup distance (no more placing apples on the moon).

The esc menu is reluctant to give and take focus, requiring the user to click once to focus it upon opening and click once again to defocus it after closing the menu.

Running out of living people to spawn into upon death will cause you to freeze in place and will display a debug message onscreen. To “fix” this, open the console and type RestartLevel, then press enter.

During periods of high CPU use, ragdolls may occasionally fall through terrain. This can also occur if you rapidly toggle in and out of ragdoll mode.

You can download 1506 as a self-extracting archive (300mb, 713mb decompressed) directly from icannotfly.net.

If you’d prefer, there are also .torrent and magnet downloads available (both 713mb, uncompressed). This is only experimental at this point and isn’t guaranteed to be available in the future.