Plenty of changes in this build! Most of the changes are backend, and there are still plenty of bugs to be tracked down and worked out, but there is a distinct visual difference between 1312 and 1401b. 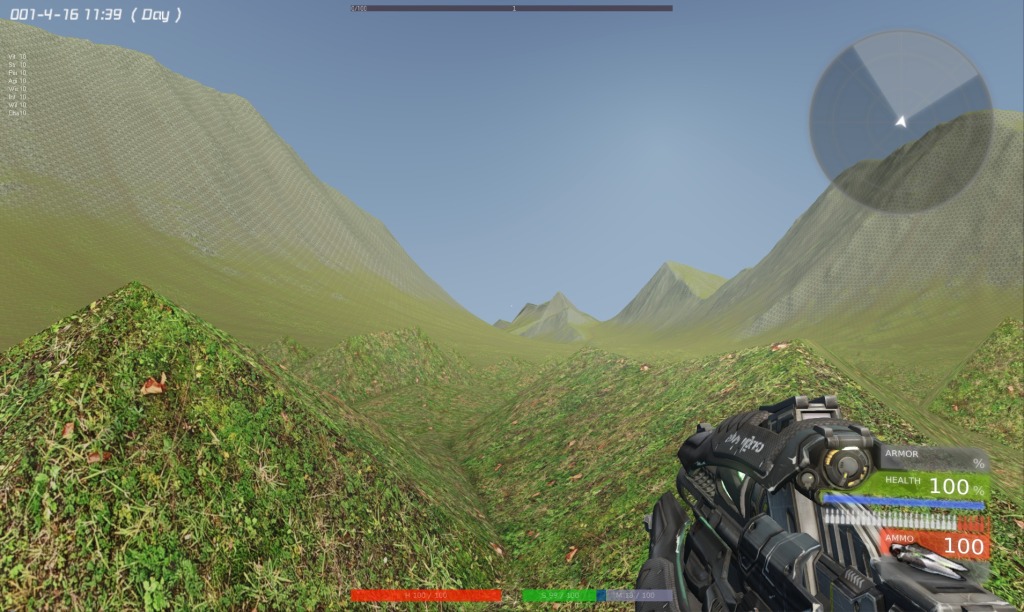 added WIP terrain. The large spikes in the terrain are an unintentional byproduct of World Machine’s erosion. It’s also a little too bumpy in places it shouldn’t be. Plenty of vehicles have been added near the spawn point for you to use to explore the terrain.

added a testEnemy spawner which spawns an infinite amount of testEnemies for you to shoot and get experience from.

added experience, health, stamina, and mana. Mana and stamina are connected such that if you overexert your mana pool, it will eat into stamina; casting spells far above your level will (soon) cause you to collapse from physical overexertion. Note that the HUD does not update properly if you’re in a vehicle and will throw a whole bunch of errors to the console.

added attribute system: vitality, strength, perception, agility, wisdom, intelligence, willpower, and charisma. An explanation of the reasoning behind and differences between these attributes is available on the Assembla wiki.

fixed day/night cycle. Moon phases have been implemented, and sunlight color is based on the angle of the sun’s rays to the atmosphere. Fog has not yet been changed, so stars near the horizon will be dimmer than they should be.

fixed cooked code not executing properly in the built executable. You can finally see all of what I’m currently talking about.

removed testEnemy’s AI, but only temporarily. It was pretty dumb, anyway.