Another down-to-the-line update; this one took me into the wee hours, but I did get it out (technically) on time. 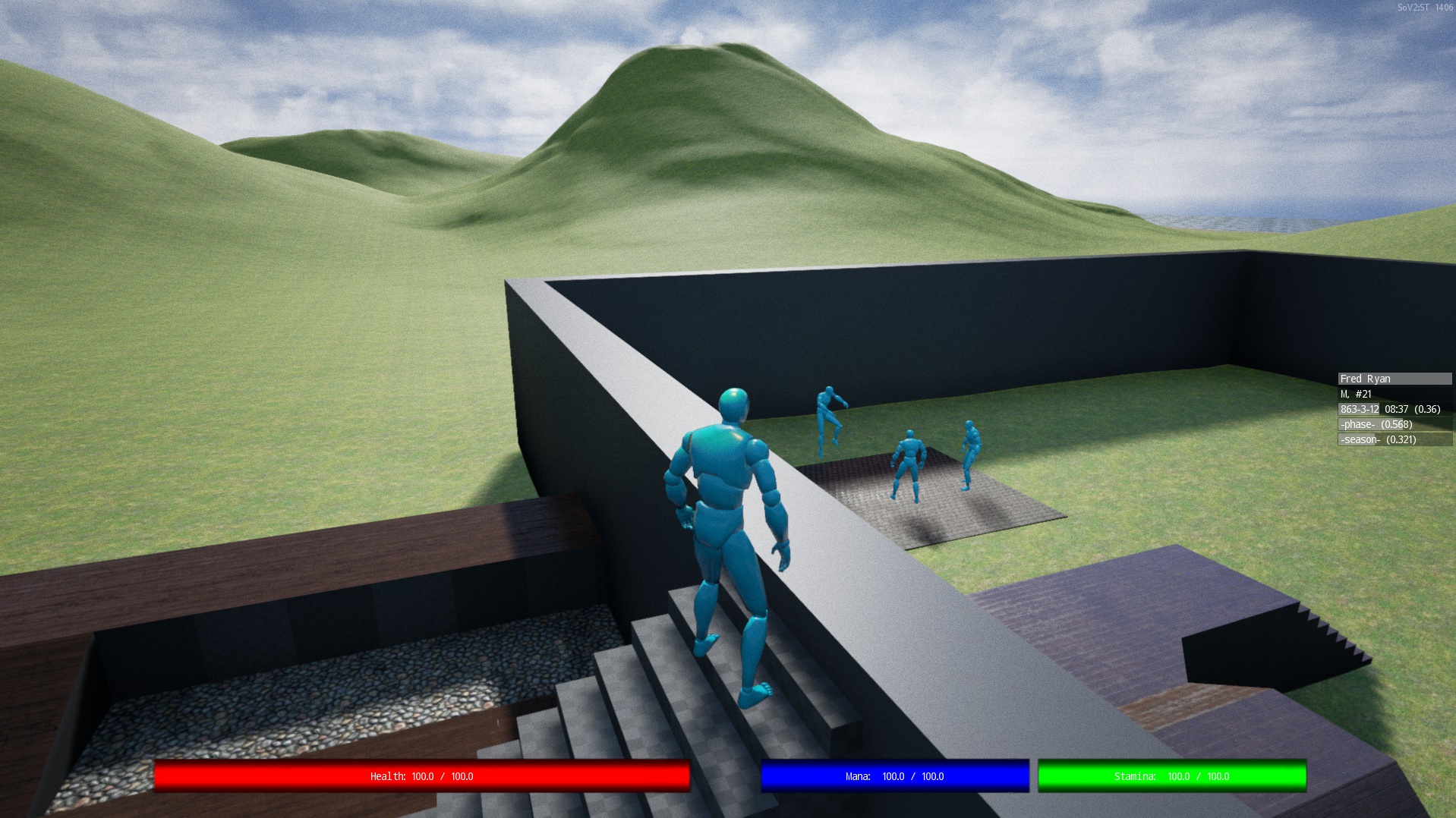 Standing watch over a bunch of dead pawns

At the start of the game, the world is seeded with a small amount (currently between 4 and 8) of bloodlines, each with a few members. Though you can’t see them in the world, the members of the other bloodlines are just as much “alive” as you character is, they just don’t have physical representations yet. The game picks one bloodline at random to be the player bloodline – eventually, this choice will be made by the player, presented as a choice of potential backstories – and creates visual representations for all members of that bloodline that are currently alive.

You’ll spawn suspended in midair as one of these physical representations (called a Pawn) then drop down to the ground when your Controller (the human-to-ingame-character interface) kicks in. If you look up in the sky, you’ll see a few other people floating there; these are your fellow familymembers, one of whom you will assume control of when you die. They do not currently have controllers (meaning they do not currently have any AI), so they will remain floating in midair until you possess one. When you spawn, make sure to take note of your name, gender, and serial number – displayed on the top two debug bars on the righthand side of the screen – as they will change when you enter a new body. Currently, the only way to die is to repeatedly deal damage to yourself by standing on the cobblestone square towards the north-east corner of the courtyard.

Oh, and if you’re lucky enough to spawn as Frank Sinatra, let me know – I’ve been testing this for weeks now with the same name sets and I haven’t once managed to get that name combination.

added new terrain, including an ocean. See Known Bugs, below, regarding the ocean.

added a new console command, Time, to roughly set the time of day using words instead of numbers (Time night or Time morning, for instance).

added a foundation and small porch to the house. This really isn’t that important, but I thought I’d mention it anyway.

added variance to the default spawn location so that pawns no longer spawn inside each other or stack vertically.

added blocking volumes to the edges of the map so that players should no longer be able to fall out of the world.

added proper Bloodline-controlled respawning: characters/pawns detect and handle their own deaths, but then hand the torch off to their associated BloodlineMember who notifies the family and locates a suitable next-of-kin. Time does not yet advance when this occurs, so it’s possible to “consume” all your family members in a relatively short timeframe.

added the beginnings of a history simulation function to ameliorate the above-mentioned problem. Currently this function only seeds the world with an initial amount of bloodlines and members.

fixed TimeAdd function/console command: it now works fully and will even accept values larger than their respective maximums. For example, adding 48 hours to the current time would result in a gain of two days rather than an error message.

fixed player name/gender debug bar so that it displays accurate information under all circumstances.

fixed Character’s gravity scale so that jumps are a little more realistic.

changed Pawn spawning methodology. Pawns now come from the BloodlineController via a BloodlineMember rather than the world.

There’s no menu, so to exit, open the console by pressing [`] or [~], (below [ESC]), type exit and hit [enter]. The 32-bit build does not include console functionality, so you’ll have to figure out your own way of exiting; killing the game via Task Manager seems to work pretty well.

Walking into the ocean may cause you to slow down, occasionally so much that you come to a complete stop. If possible, avoid the ocean (there’s nothing good in it anyway).

Turning headbob off will cause the player’s head to move through the camera while running or sprinting, obstructing its view.

Running out of living family members in your bloodline will cause you to freeze in place and will display a debug message onscreen. To “fix” this, open the console and type RestartLevel, then press [enter].

You can download 1406 (binaries are included for both x86 and x64) directly from icannotfly.net. If you find any bugs, please let me know.